2 KASAMBAHAY CASE OF ABUSED IN KUWAIT 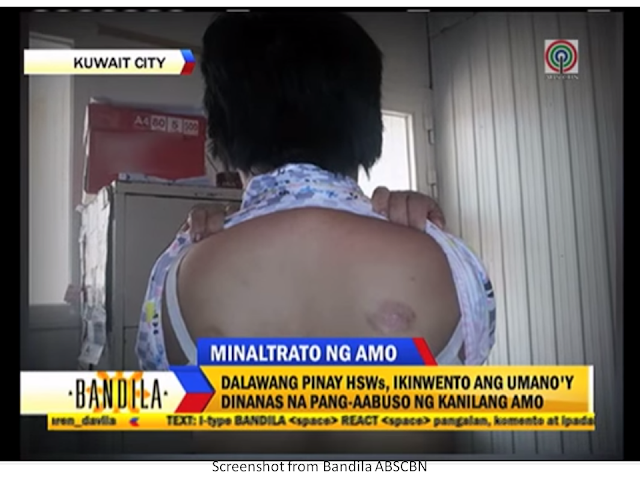 
Two Filipino household service workers (HSWs) working in the same household escaped from their employer and sought refuge at the Philippine Embassy shelter in Hateen area after enduring allegedly eight months of severe physical abuse from their female Kuwaiti employer leaving them with bruises and scars all over their body.
She allegedly abused them verbally, bit them, poked their eyes till blood oozed out, hit them with a broom, hose or other hard objects. Worst of all, she almost cut the tongue of one of the two HSWs and even inserted a small bottle filled with chili hot sauce and other spices into her private part...
When asked by the Arab Times, embassy case officer Mar Hassan denied the allegations of the two HSWs regarding the case settlement. “That’s not true. They might have taken everything out of context. I took them to the police station because the CID has been calling me so they can identify their employers. This is one of the legal procedures. I left the room because I was asked by the investigator to leave. Then it turned out that they have an absconding case so the police detained them I tried to talk to the police on duty but they won’t let them out. I even told them not to sign any Arabic paper and not to settle. We will fight for justice,” explained Hassan.
Read the whole news account here via Arab Times: