E-PASSPORT HOLDER CAN SOON USE E-COUNTERS

Share
Via ABS-CBN: Expect shorter immigration counter lines at the airport as the Bureau of Immigration launched the first ever e-counter at the arrival area of Ninoy Aquino International Airport (NAIA) Terminal 3.
screenshot via ABS-CBN Bandila 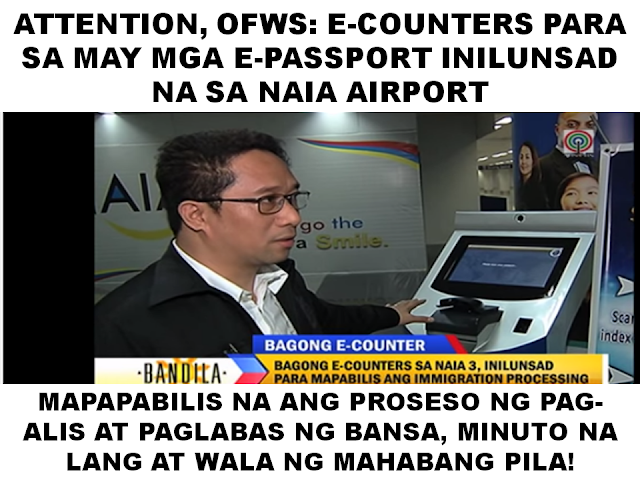 Bureau of Immigration chief Siegfred Mison said the e-counter will not only help expedite the basic immigration passenger profiling and documents verification but will also shorten the queues for departing and arriving passengers.

Mison said the e- counter will eventually be linked with the records database of Interpol, National Bureau of immigration and the Department of Justice for easy verification of all incoming or outgoing passengers.

"The e-counter will help ease the queueing but it will also serve as the direct link to our counterpart with local and international enforcement and effective border control," Mison said.

Department of Justice Assistant Secretary Guillermo Sy also hailed the project.
"Technology is at hand and just like the application of an ATM card, any passenger can directly use the e- counter with utmost convenience," Sy said
Sy added that some 500 units will be installed at the NAIA terminals 1, 2, and 3. These are expected to address the lack of immigration personnel.