OFW Family Club party-list Rep. Roy Señeres on Thursday declared his plan to run for president in the 2016 national elections.
"I'm running for president. I'm happy to inform you I have a complete slate. I have a vice presidential candidate, 12 senators. I'm running under a Comelec-accredited party," he told House reporters in a press conference.
Señeres said that he was urged by a manifesto from the OFW FORSE (Friends of Roy Señeres Everywhere), the ATAKK (Alisin ang Tanikala ng Kontraktwalisasyon at Kurapsyon), and the Respect our Security of Employment Movement.
He said he will announce his runningmate and the complete senatorial candidates in due time as he claimed that three of his senatorial candidates are OFW community leaders.
The entire slate will run under the Partido ng Manggagawa at Magsasaka led by lawyer Jose Malvar Villegas. This is the same political party used by then Defense Secretary Renato de Villa in 1998 when he tried his luck in a presidential bid.

Señeres pointed out that his team will focus on the eradication of contractualization and job order employment and corruption. He said contractualization robs 15 million Filipino workers of their security of employment. This is aside from the 10 million contractuals in the government sector.
He claimed that hundreds of businessmen lay off workers every 3 to 5 months. If he became president, he said, he would issue an executive order directing all employers to comply with the law and ban the termination of workers every 5 months or else they will be penalized.
"According to latest statistics, there are 15 million contractuals working in giant malls and chain restaurants. This is against the law and the constitution because the constitution says every worker must have security of tenure. They cannot be dismissed from work without just and authorized cause," the former Kuwait Ambassador who helped Sarah Balabagan said.
Señeres said OFWs have promised 5 US dollars each to fund his campaign even as he said he will not take campaign contributions from tycoons.
Señeres hopes he will not be considered a nuisance candidate because he has proven his electability as congressman.
News Source: Interaksyon.com 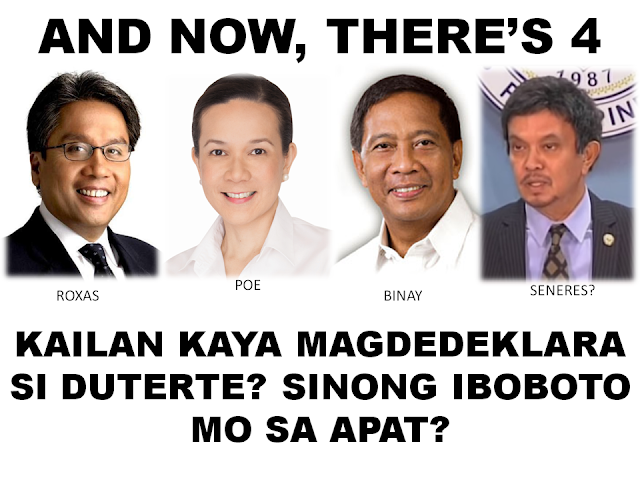