4 NAIA POLICE WHO TRIED TO EXTORT FROM THE AMERICAN LANE MICHAEL WHITE, ONLY RELIEVED?

"On September 16, the family went to Ninoy Aquino International Airport Terminal 4 and had already boarded the plane to Coron when the flight was delayed. Due to flight restrictions, the airline had to rebook the flight the next day while having the passengers stay at a hotel.
The next day, the family again went to NAIA Terminal 4 to take the same flight. It was during the x-ray screening that airport screeners Maria Elma Cena and Marvin Garcia said they saw something in White's bag.
Zoleta said White's bag went through the x-ray a total of 7 times. She said she offered to help but Cena told them to stand back.

Zoleta said Cena had already checked the outer flap of White's bag the first couple of times but found nothing. A video taken by Zoleta of the screening also showed that Cena put her hand inside the outer flap of White's bag. It was only afterwards that a bullet was found inside the outer flap of the bag.
The airport screeners then accused White of bringing a live bullet to the airport.
Zoleta said she asked the airport screeners if they needed to rebook their flight since the plane was leaving in 15 minutes. However, she said Cena told her that they had enough time.
"They didn't tell us to rebook our flight because they would put my son in jail," she said.
Zoleta said Cena was surprised that they already had boarding passes since they had already checked in the day before.
A certain SPO2 Rolando Clarin also threatened to fine Zoleta after discovering that she had taken a video.
Clarin also told Zoleta: "E ayaw pa aminin ng anak mo e. Bakit di mo na lang paamin sa anak mo?
White, however, said the luggage was his but not the bullet. He also told senators that Clarin asked for 30,000 pesos to make the case go away.
Zoleta claimed a certain PNP officer Junio asked her to pay 30,000 pesos so that no charge will be filed. She claimed Junio told her the price would go up to 80,000 pesos if the case reached headquarters.
Zoleta, however, pointed out that her husband is a preacher and had no income while her stepson had just resigned his job.
The stepmom said the last person to pressure her was a certain PNP officer Navarro at the investigation desk at NAIA Terminal 1.
She said Navarro told her: "Ituluyan mo na yang anak mo. Foreigner ang anak mo. Dito sa Pilipinas, kawawa ang buhay nyan. Maru-ruin ang buhay niyan. Kung ako sa iyo, tulungan mo na."
Zoleta said she was shocked that the police officer would say that her stepson's life would be ruined.
Because of their refusal to pay a bribe, White was fingerprinted by the police ahead of the filing of the complaint for carrying live ammunition."
read the rest here 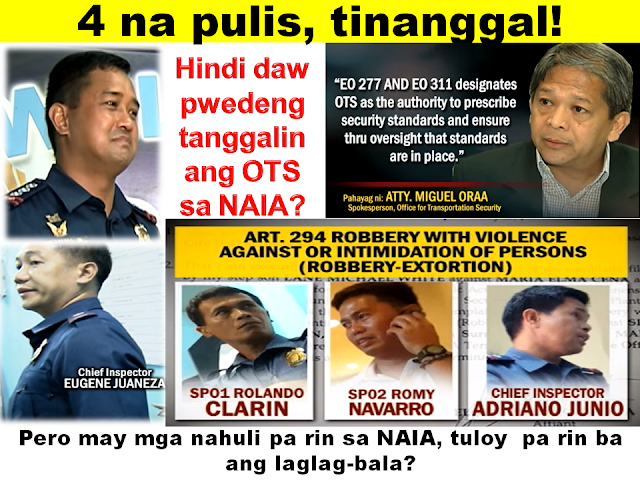