Bureau of Customs Increased Balikbayan Containers from P80,000 to P180,000

Via Inquirer News: Bayan Muna Rep. Neri Colmenares said Lina should show some respect for Congress which is currently discussing the Bureau of Customs’ (BOC) plan to raise the cost of shipping of balikbayan boxes—the gift boxes of Filipinos working abroad to their relatives here.

“Please respect Congress. There is a pending investigation here and he (Lina) dares to touch the rates opposed by Filipinos overseas,” said Colmenares.

Quezon City Rep. Winston Castelo said Lina should first justify the hike in duties on balikbayan boxes which he noted was widely derided by the public when it was announced in August along with the plan to conduct full inspections of these packages.

Lina initially increased duties on twenty-foot containers from P80,000 to P120,000 in August.

Lina further jacked up the duties to P180,000 last month, even after a controversy erupted over the balikbayan box inspection and duty hike.

Back in August, the Bureau of Customs issued a statement saying:


“To our overseas Filipino workers (OFWs), the Bureau of Customs is not increasing taxes on thebalikbayan boxes nor do we want to impede in existing processes. No such statement on tax increase has been made,”

“We are not after the overseas Filipino workers or their pasalubong (gifts) to families. We are after the smugglers who have resorted to using the balikbayan boxes and consolidated shipments to smuggle contraband in the country through fake consignees or insertion of smuggled boxes or goods, otherwise known as riders, in consolidated shipments,” it said.

But recently, problems are arising between freight forwarding companies and the Bureau of Customs after the later raised fees on the taxes and duties on shipping containers of freight-forwarding companies, from Php 80,000 to Php 120,000 a notable 50% increase on tax.
It is anticipated that this increase in taxes of freight companies will translate into Php 150 to Php 250 additional shipping cost per balik-bayan box of OFWs.

In the press statement, Recto said "it has been confirmed that the amount of duties and taxes on a shipping container has been increased from P80,000 to P120,000...

It has also been confirmed at the hearing, added Recto, that Customs plans to further raise the duties and taxes on a container of balikbayan boxes to P180,000 this October.

The increase in duties and taxes to freight forwarders could eventually end up to an additional Php 250/box increase on shipping fees to OFWs this December.

"In short, the two increases will force OFWs to pay an additional P250 per box. Whoever will send a balikbayan box this Christmas, in all likelihood that will be hit by the additional charges." 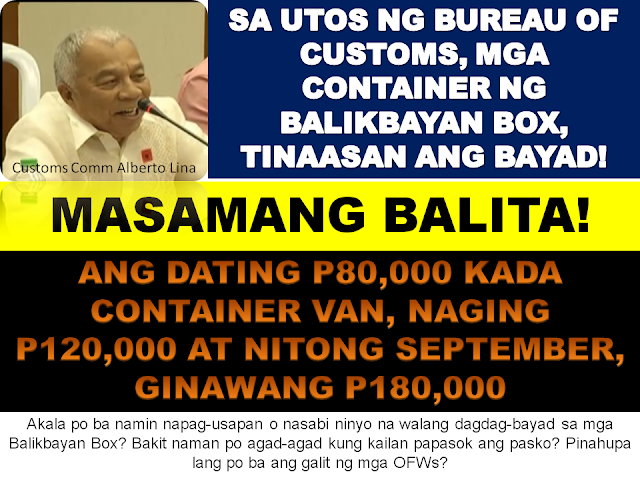 This information was confirmed by the freight forwarders present at Thursday's hearing, Recto said. As consolidators, these are the parties who actually pay the duties and taxes to the Customs.

A second round of increase is due to be implemented this coming October. Where the Php 120,000 consolidator tax will be increased to Php 180,000.

"The scenario of a second round of increase next month was never disputed by any BOC officials present during the hearing," Recto said.

It has been noted that few months ago a heated issue between OFWs and the BOC made noise in the social media after the BOC declared that they will implement complete inspection or open all boxes and tax the balik-bayan boxes that has more than Php 10,000 in value.  With a promise that they will amend the policy on custom duty and taxes for the benefit of OFWs specially this coming Christmas season.

Is this indeed the Christmas present that they are referring to?