Did Mar Roxas Really Said He Don't Need the Vote of the OFWs? 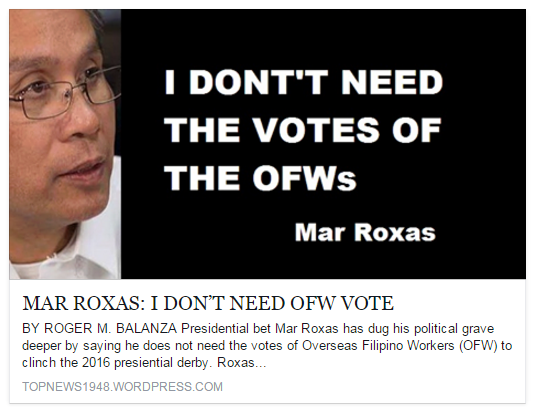 I won't vote for Mar Roxas but when I saw the graphic post above and read the link, I believe the above quote is a cheap shot and misinformation and even though I am not rooting for Mar, people deserve to know the truth and what did he ACTUALLY SAID in that interview in ISABELA.


Watch the video below to find out for yourself:


Exact caption below from what he said from the above video. 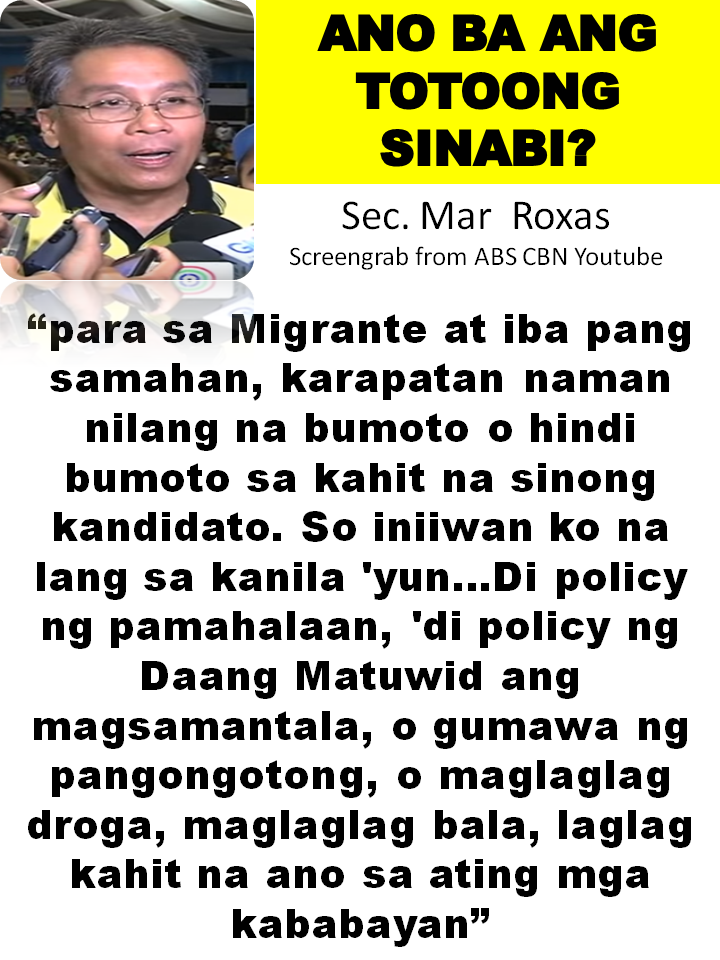 Here is the actual report via GMA NEWs

Interviewed by reporters in Cauayan City in Isabela province, Roxas said it is within Migrante or any group's rights to vote as they pleased. He also refused to give weight to the group's statements.

In a separate and detailed news by RAPPLER NEWS here:

‘Not his fault either’

"Roxas also said he is not fazed by the laglag-boto (dropping of votes) campaign against him by overseas workers' rights group Migrante-Middle East.
“Para sa Migrante at iba pang grupo, karapatan naman nila na bumoto o hindi bumoto sa kahit sinong kandidato, iwanan na lang natin sa kanila,” Roxas said.
(For Migrante and other groups, it is their right to vote or not to vote for any candidate. Let us just leave it to them.)

He said he doesn't need to debate with the group over the issue because he has nothing to do with it."
Read the whole news story here 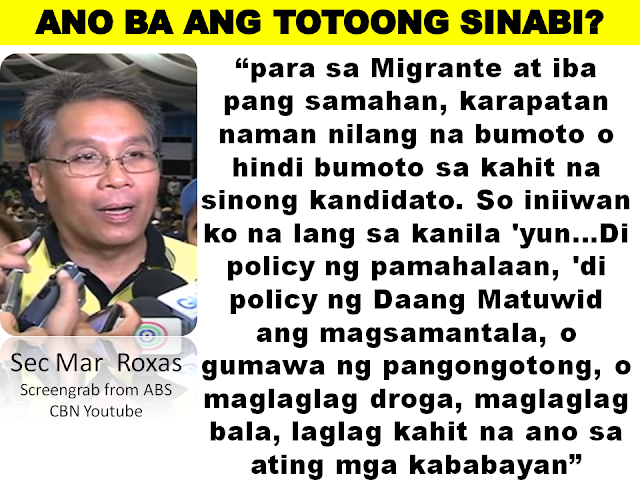 I pity Roxas though, he need to be really clear in his answers and messages.

The OFWs, mostly in the social media are calling for Zero Votes of all LP national candidates because of the series of issues that affects OFWs and their families, issues like compulsory payment of terminal fee and later to fall in line and be refunded at NAIA.Other Issues like randomly opening Balikbayan Boxes, and now this laglag-bala at NAIA victimizing OFWs as well.

The sentiments of the OFWs with the current administration are best describe by this graphic from one of the pages in the Facebook.

Roxas needs to show that he cares for the OFWs and their families.

SO THERE IS NO TRUTH THAT MAR ROXAS ACTUALLY SAID THE EXACT WORDS:

"I DON'T NEED THE VOTES OF THE OFWs"