DON'T SELL OR SWAP YOUR OLD SMARTPHONE, THEY CAN RECOVER YOUR DELETED PHOTOS AND VIDEOS

DON'T SELL OR SWAP YOUR OLD SMARTPHONE, THEY CAN RECOVER YOUR DELETED PHOTOS AND VIDEOS
If you have private pictures on you mobile phones and are worried about them being seen by strangers, then don’t swap or sell your old mobile smartphones. 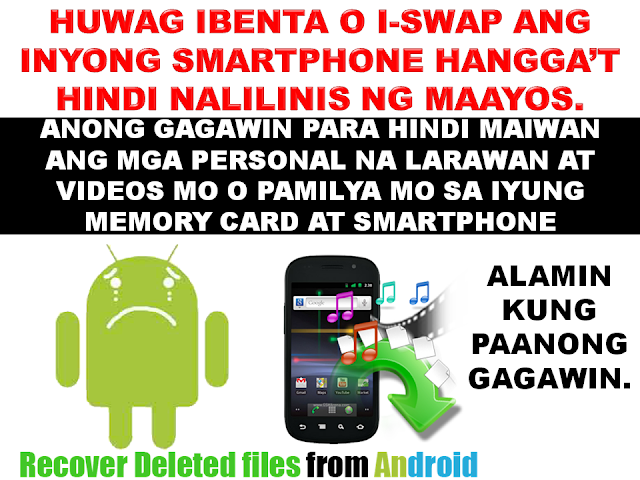 Dubai Police in a news report advices public who have taken or received private pictures on their mobile phones to avoid selling them even if you already deleted the images or videos.

“Today, there are many programs that can retrieve deleted pictures, even in old and formatted mobile phones. Therefore, it’s advisable for people who have private pictures of themselves or their families on their phones to avoid selling the gadgets to shops or individuals,” they said and added that many people in the GCC have fallen victims after mobile phone shops retrieved their private pictures and blackmailed them.”

Example of the Apps in Android are:
DUMPSTER
DISK DIGGER

This is probably some of the reasons why we saw a lot of FB pages with Pinays, and some OFWs with images that are private and degrading being posted online. Some of the kabayans may have no idea that after selling or swapping their mobile phones, their private photos can still be recovered even after you deleted them, reformat the memory card or factory reset the mobile phones.

What do you do when you replace your old mobile phones and how will you protect your privacy?

Here are some of our suggestions:
1. Never take photos of your intimate and private body parts and never ever send it to someone you think you fully trust even its your spouse. That's plain simple. We don't know what will happen next, one of you will have account that could be hacked, phone that could be snatched, stolen or lost and those images in your smartphone will be accessible to some people who might post it online. (Kahiya-hiya di ba?) 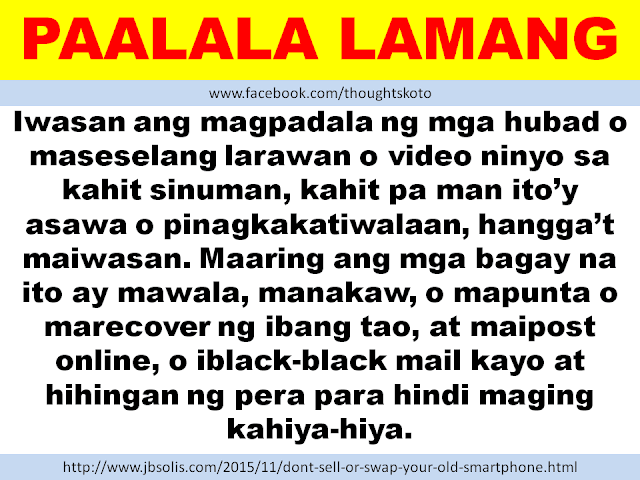 2. If you have intimate images and videos in your mobile phones, even after you deleted and reformatted it, connect it to your PC or Laptop, and upload large size of songs or anything like movies on it, large enough that it will fill the entire memory of your phone and then delete it again. Through that way, even if someone will try to recover erased data from the device, all he will recover are broken or corrupted songs and videos that he won't probably be able to play.

3. Someone suggested this too: There's another way to prevent data recovery in android phone. Before you perform the factory reset on your phone, you should encrypt your phone. That way the data are encrypted and then you can delete the data because once the data is deleted, it can never come back. (meaning that the data is corrupted so the shop keeper can't do anything with the corrupted data.)
Go to settings, then security and select "encrypt phone". The process will take like a hour or more depending on how much data is there on your phone. After encryption is completed, then you can perform the factory reset on your phone.

4. Smash it with hammer or remove the battery and throw it on fire to burn it but of course this will not be practical so try the methods above.

One Video detailing how to recover some deleted pictures and files in your android device: