"No Touch Policy" of Baggages of Passengers at NAIA

"No Touch Policy" of Baggages of Passengers at NAIA 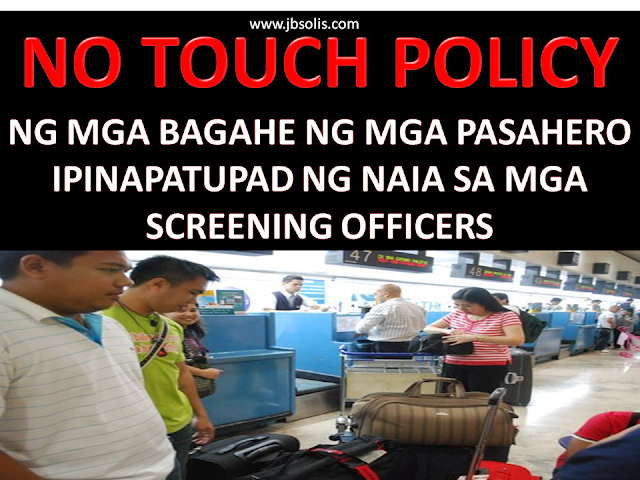 The head of the Office of Transportation Security on Tuesday defended his personnel amid the "laglag bala" issue, saying it is unlikely that bag inspectors are involved in the planting of rounds of ammunition in passengers' luggage as part of an extortion scheme at the Ninoy Aquino International Airport.

Luggage screeners at the country's airports are no longer allowed to touch passengers' bags especially if x-ray scanners catch suspicious items such as bullets inside them, OTS administrator Roland Recomono said in an interview.
Carrying ammunition on a plane is prohibited by law.
If a suspicious item was seen through the x-ray, it would be the passenger who would open the bag instead of the inspectors.

He said that it was possible that the planting of bullets was being done outside the airport such as in the taxis or by porters outside the terminals.

The OTS is the agency under the Department of Transportation and Communication (DOTC) in charge of luggage inspectors. President Benigno Aquino III on Monday tasked the DOTC with doing a thorough review amid fears of the extortion scam.

Recomono said no one among the OTS inspectors have been charged or placed under investigation in connection with planting of ammunition.

He said 65 OTS personnel have been dismissed; 19, suspended; and 36, under investigation. None of them, Recomono said, were in connection with laglag bala.
Read more here
©2015 THOUGHTSKOTO
Share