RUDY DUTERTE IS RUNNING FOR PRESIDENT OF THE PHILIPPINES


I am a pro-Duterte OFW, and the news brought joy to me personally that he has finally announced running for president.  In an event in Cavite, saying that he could not allow someone who only possess “presumptive Filipino citizenship” to run for president of the country, Davao City Mayor Rodrigo Duterte last night told former schoolmates from the San Beda College of Law and supporters that he was going to run for the country’s top position in the May 2016 national elections. 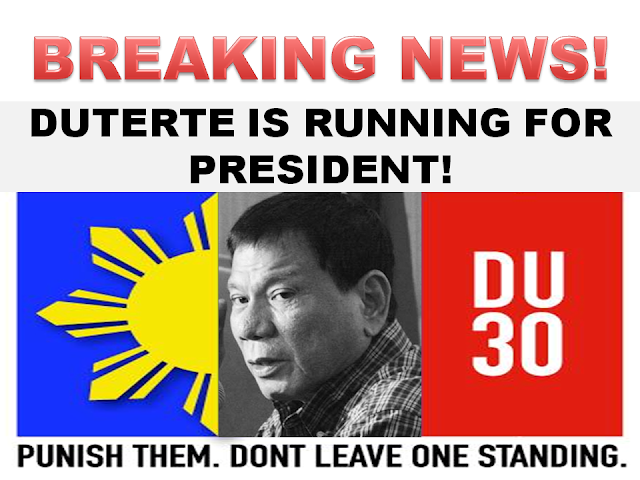 "After months of giving mixed signals about his presidential bid, Davao City Mayor Rodrigo Duterte on Saturday said he is finally going to run for the country's top post.
During a private party in Dasmariñas, Cavite, the feisty mayor said he decided to join the 2016 race after the Senate Electoral Tribunal (SET) voted against petitions to disqualify Grace Poe on the grounds of her citizenship.
"What made me decide to run? Was it an offer for money? No. Gusto ko lang sabihin sa lahat stop (expletive) with the Philippines. Nothing against Grace but if you run for the highest post in the land, it must be reserved for a true-blue Filipino,'' Duterte said.
"If ever you make it, you will be a presumptive president by citizenship. Hindi ko matanggap yung ganun. What will happen when she is disqualified because she is American? Give me an Igorot, an Aeta, a plumber. Kahit ano basta Pilipino. It is a matter of principle. Pagka ganun my candidacy for the presidency is on the table."
Before ending his speech, he challenged Poe to produce her birth mother to prove that she is Filipino.
"If she can prove she is Filipino then I will step down. I will be her (Poe) campaign manager."
Duterte arrived at the party with Senator Alan Peter Cayetano, who is running for vice president and has been rooting for a tandem with the Davao City mayor.
Duterte added that he is also in Luzon to seek the blessing of his partymates from the Partido Demokratiko Pilipino-Lakas ng Bayan (PDP-Laban)."
Read more here