This report via INQUIRER NEWS
"THE LAND Transportation Franchising and Regulatory Board (LTFRB) has cited for contempt Julius Neil Habana, a seaman who posted on social media that a taxi driver had planted a bullet in his friend’s bag, for failing to appear before the agency to substantiate his allegations.

“It appearing that Habana refused to appear before this court despite efforts by the board, let contempt order be issued until he appears and makes himself available for investigation,” LTFRB Chair Winston Ginez said during Tuesday’s hearing.
“In the meantime, this case shall be archived until the arrest of Habana is made possible by law enforcement officers,” Ginez added." 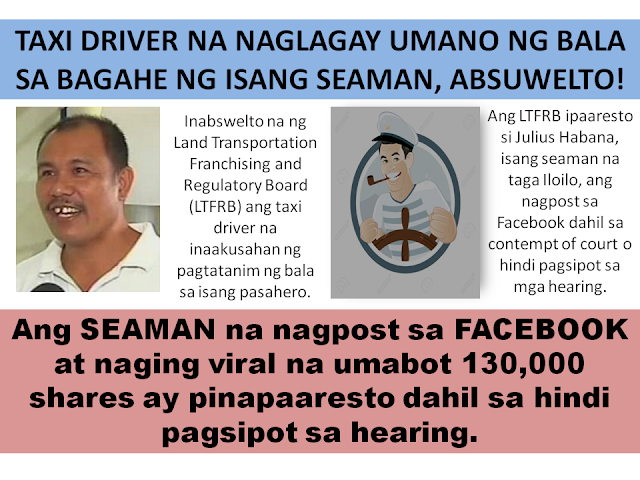 v
Habana apparently told the process server that he was already in Iloilo province and would like the hearing to be held there, LTFRB board member Ariel Inton mentioned during the hearing.
“Because of his conduct, I would recommend the board to cite him [for] contempt,” Inton said.
Ricky Milagrosa, the taxi driver implicated in the alleged “tanim-bala” extortion scheme, said he would file a case against Habana since the accusation had affected his work and led to his child being bullied at school.
A nationwide taxi organization has come forward to assist in the filing of the case.
“Taxi drivers already have a bad image and we want to change that. We came here to observe the hearing. If the driver committed wrongdoing, we would [seek] the revocation of his license. But it seemed the allegation was fabricated and only created panic among passengers,” said Fermin October, national president of Dumper (Drivers Unite for Mass Progress and Equal Rights).
In a post on Facebook, Habana said that his fellow seaman boarded Milagrosa’s taxi from Sampaloc, Manila to the Ninoy Aquino International Airport on Oct. 29.
Habana said his friend informed him through text that he saw the driver put something in his bag. He added that he advised his friend to go instead to his boarding house in Malate, Manila where he claimed they found a bullet in the bag.