Share
An OFW in Hongkong  has been arrested for stealing  two baby wipes, a pair of shoes, blankets, t-shirts, two towels, five handkerchiefs, and a toy car from her employer. Except for the wipes and pair of shoes, all other items were already used. 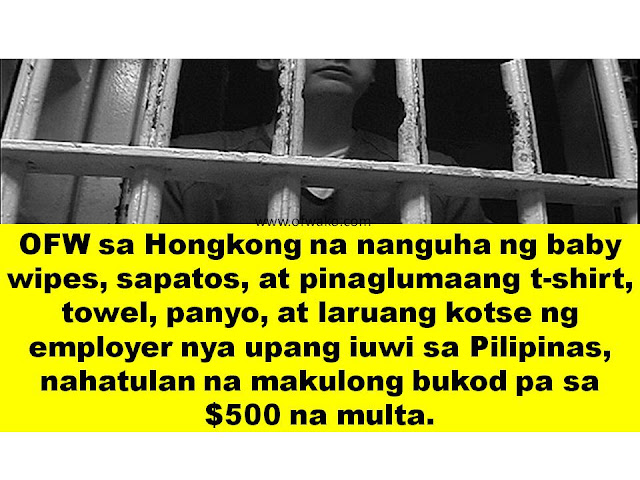 The 45 year-old Filipina OFW, named Imelda admitted to the crime.
She has been working for her employer since June, and she has decided to terminate her contract because her husband found an employment in UAE,
On Oct. 31, when she was about to leave, her employer checked her luggage and found her old belongings.


Principal Magistrate Andrew Ma ordered her to pay a fine of $500 with the following warning:

“You came very close to an immediate custodial sentence,” Ma told Imelda during the hearing on December 1.“This is not a case of theft by finding or supermarket theft. When you left your employer’s family, you just brought along $550 worth of belongings. This is a case of breach of trust,” he added.

Besides ordering her to pay a fine,  she was also sentenced to two weeks in prison but suspended it for two years.
This means that if Imelda does not commit a crime in Hong Kong in the next two years, she does not have to go to prison.
Source
©2015 www.ofwako.com
Share