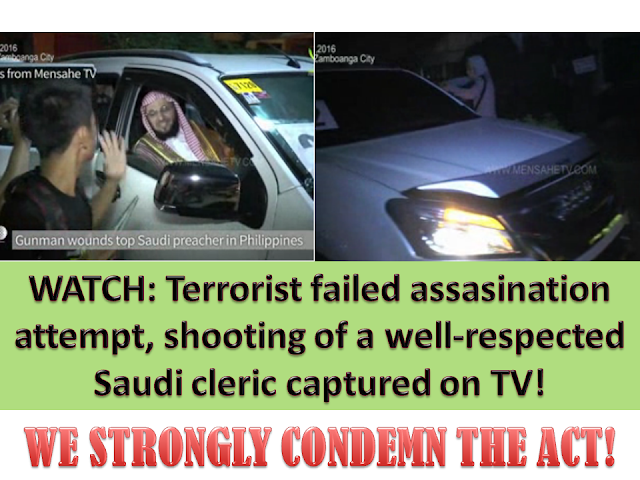 A failed attempt to assassinate a prominent Saudi scholar in the Philippines was caught on television, showing the hooded assailant firing at the preacher from close range. The gunman walked toward Sheikh Aaidh Al-Qarni’s car on Tuesday night as he was leaving a packed auditorium in the southern port city of Zamboanga, where he had given a lecture.


The assailant hid behind a crowd seeking selfies with a smiling Qarni as his vehicle slowly rolled out of the venue, footage on local station Mensahe TV showed. Qarni, who was on a Daesh or ISIS hit list, survived the attack with wounds to his right shoulder, left arm and chest, according to police. A shocked crowd scampered for safety covering their heads as the shots were fired. His companion in the car, Saudi Arabia’s religious attache to the Philippines, Sheikh Turki Assaegh, was also wounded in the attack.

via ArabNews
A special police unit investigating the case has asked for a month to determine the affiliation of the suspects, who live on the outskirts of Zamboanga, a southern Philippine port city that is frequently targeted by Islamic extremists.
Qarni was in Zamboanga for a speaking engagement at the Western Mindanao State University organized by local Muslim leaders. Mensahe TV footage showed him speaking on a table strewn with red and white flowers before a packed and sweltering crowd.
READ THE REST HERE
©2016 www.ofwako.com