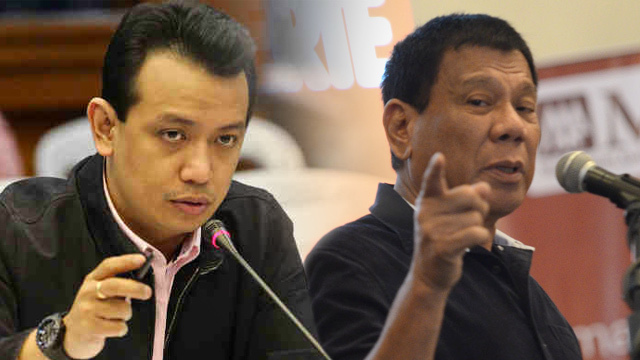 Image from Rappler.com
President-elect Rodrigo Duterte has a message to Sen. Antonio Trillanes. "Sabi ko kung hindi ka abogado, wag kang magpaabogado. At dre, hindi mo ako kaya. Kung gusto mong barilan, legal, do not pretend that you are the only one who have balls in this country."


TRILLANES CONGRATULATED DUTERTE AND ADMIT THAT THE FILIPINO PEOPLE HAD SPOKEN after the landslide victory of Duterte.
TRILLANES ISSUED A STATEMENT RESPECTING THE RESULT OF THE ELECTION IN THIS VIDEO REPORT.

"I respect the will of the Filipino people. They have spoken clearly and resoundingly that they want Mayor Duterte to be our next president. I assure the Mayor and our countrymen that I will not be a hindrance to the reform initiatives he intends to push in our government. Having said that, I will continue with my advocacies as a legislator in our system of checks and balances. May God bless our country." - Sen. Antonio Trillanes
And he said he is ready and willing to cooperate to the Duterte administration.

By Manny Piñol
Dear Sonny,
It was both puzzling and irritating to hear you issue statements to the media declaring that you are now willing to cooperate with the administration of the next President, Rody Duterte.
I can't help but ask myself whether the conciliatory tone of your statements now is a manifestation of statesmanship, where you are willing to yield on the fundamental advocacies that you carry for the sake of our people and country, or whether it is an indication that the issues you raised against Duterte towards the last days of the campaign were canards and lies intended to derail his ascension to the Presidency.
So, you are now suggesting that we just forget the issues raised during the campaign?
Maybe, just maybe, President-elect Duterte, in the kindness of his heart, will accept your offer of reconciliation but we who believed in him and who were shaken and hurt by your accusations against him could not forget that easily.
Neither are we willing to forget the accusations that you raised without resolving these.
Let's go through the issues you raised:
1. You accused Duterte of stashing as much as P2.4-B in his accounts with the Bank of Philippine Islands and presented to the media documents citing transactions which involved hundreds of millions. You even suggested that this unexplained amount could come from drugs. This shocked us because we have known Duterte as incorruptible and that he hated drugs. For a while, even the most loyal of his supporters asked themselves: Is this true?
2. You followed this up with a listing of properties which you alleged were owned by the Duterte family and which you suggested were proofs of the family's unexplained wealth. Well, we all know that at least two people - a doctor in Cagayan de Oro City and an heiress of a family which owns a huge public transport fleet in Bacolod City - have branded you a liar for including in your list properties which they owned.
3. Finally, you capped your attack with a "plunder" case which you filed with the Office of the Ombudsman at the last day of the campaign period claiming that Duterte,as Mayor of Davao City, hired "ghost employees" whose salaries ran into hundreds of millions.
Of course, we all know that you called Duterte "duwag" but it is something that he and you will have to settle because even at my age, I still have not found a way to measure a man's courage or cowardice.
These are the issues you raised against Duterte in the heat of the campaign and you are now suggesting that we just forget these and go on with life?
Ganyan na lang ba palagi?
Every election period, we destroy people's reputation, accuse them of being corrupt and then we say afterwards "kalimutan na lang natin?"
Hwag boss.
You owe it to us who were hurt by your accusations that you follow through with your charges against Mayor Duterte.
Do not hide behind a feigned act of reconciliation.
As for us, we also would like to pursue the issues raised by your former cellmate and fellow ring leader, Marines Captain Nick Faeldon.
You have to answer his accusations against you and these are:
1. Did you or did you not solicit and receive money from then Cong. Imee Marcos while you were in detention with the other officers involved in the Oakwood Mutiny?
2. Did you or did you not receive money from Sen. Jinggoy Estrad while you were in detention?
3. Did you or did you not compromise our country's interests and even sovereignty in your 16 trips to China?
4. Are you or are you not willing to meet Faeldon in a face-off to determine who between you is telling a lie?
You have always projected the image of a no-nonsense Senator who will stop at nothing just to get to the truth.
Tell us the truth Sir, election or no election.
We're not done yet, Sir. Let's settle the issues.
Anything short of that would be a betrayal of people's trust in you as member of the Philippine Senate.
Respectfully yours,
Manny Piñol
Former Governor, North Cotabato
A voter for Antonio Trillanes IV
©2016 www.ofwako.com