Do You Know? Benefits of Solo Parent's Welfare Act and Parental Leave 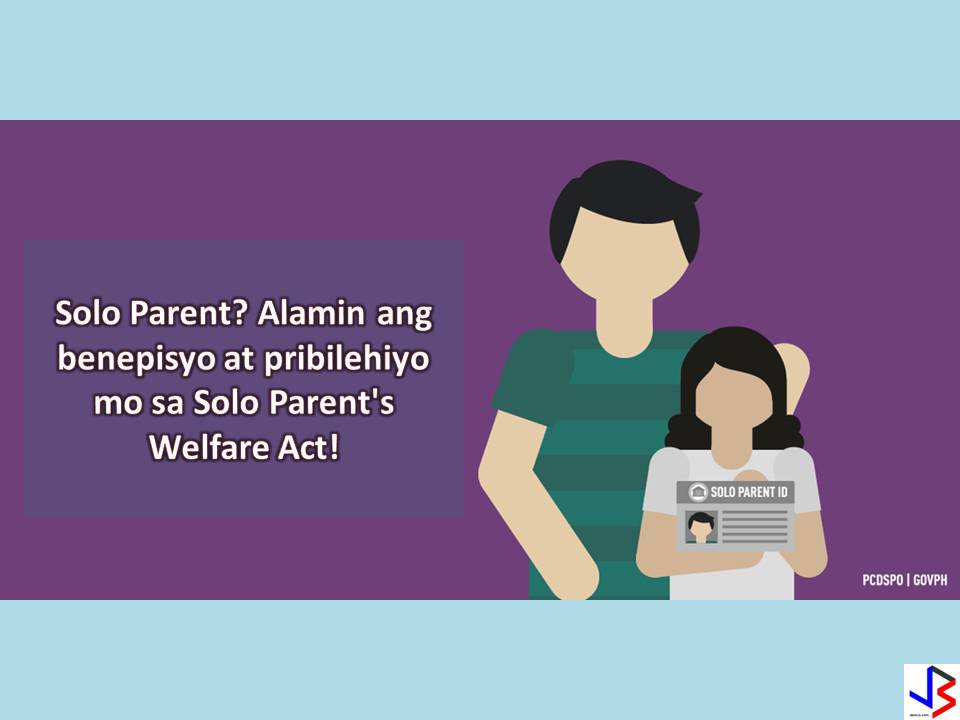 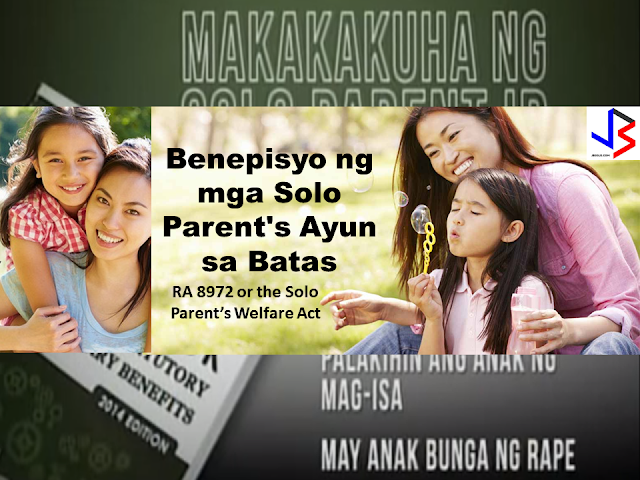 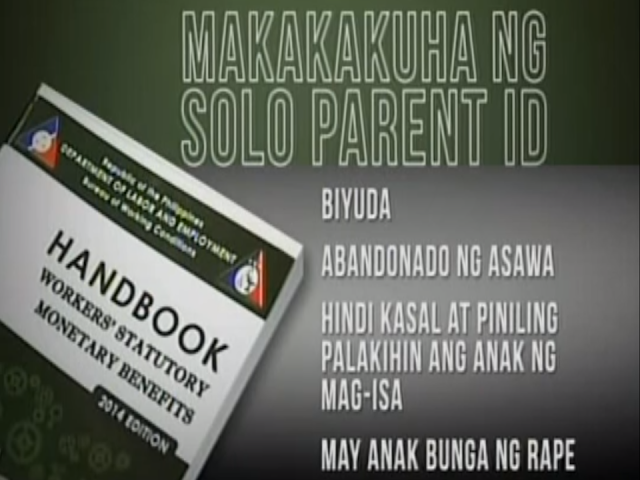 WHAT IS THE SOLO PARENT’S WELFARE ACT?
RA 8972 or the Solo Parent’s Welfare Act provides for benefits and privileges to solo parents and their children. It aims to develop a comprehensive package of social development and welfare services for solo parents and their children to be carried out by the Department of Social Welfare and Development (DSWD), as the lead agency, various government agencies including NSO and other related NGOs.

Read: Do you want to know what benefits you can avail as solo parent?

Read: Guidelines on How to File for Child Support if You're a Single Parent


WHEN DID RA 8972 TAKE EFFECT?
RA 8972 was signed into law on November 7, 2000 and took effect on November 28, 2000. Its implementing rules and regulations (IRR) was approved in April 2002.
WHO ARE CONSIDERED AS SOLO PARENT?
Solo Parent is any individual who falls under any of the following categories:
1. A woman who gives birth as a result of rape and other crimes against chastity even without a final conviction of the offender, provided that mother keeps and raises the child.
2. Parent left solo or alone with the responsibility of parenthood due to the following circumstances:
a. Due to death of spouse.
b. Spouse is detained or is serving sentence for a criminal conviction for at least one (1) year.
c. Physical and/or mental incapacity of spouse as certified by a public medical practitioner.
d. Legal separation or de facto separation from spouse for at least one (1) year, as long as he/she is entrusted with the custody of the children.
e. Declaration of nullity or annulment of marriage as decreed by a court or by a church as long as he/she is entrusted with the custody of the children.
3. Unmarried mother/father who has preferred to keep and rear her/his child/children instead of having others care for them or give them up to a welfare institution.
4. Any other person who solely provides parental care and support to a child or children.
5. Any family member who assumes the responsibility of head of family as a result of the death, abandonment, disappearance or prolonged absence of the parents or solo parent.


WHAT ARE THE CONDITIONS FOR THE TERMINATION OF THE PRIVILEGES OF A SOLO PARENT?


DOES THE SOLO PARENT ACT APPLY TO THOSE WHOSE SPOUSE IS ABROAD? 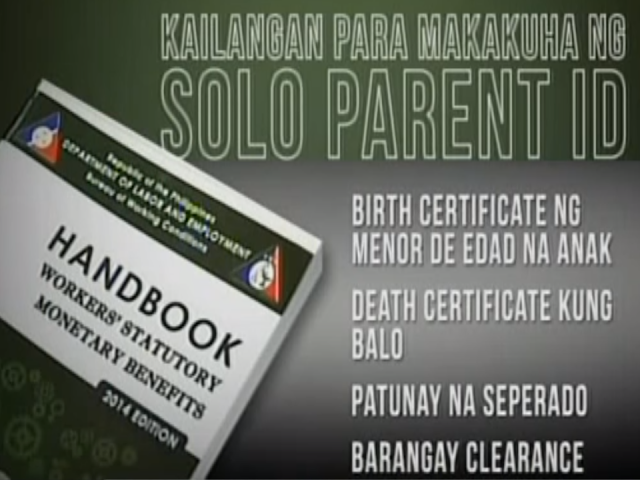 WHAT IS THE PACKAGE OF SERVICES FOR SOLO PARENT?

"Should you be able to establish these factors, you may avail yourself of the parental leave and a flexible work schedule as long as the same do not affect your individual productivity and that of the company (Sections 8 and 6, id). You may also avail yourself of the educational benefits being given by the Department of Education (DepEd), Commission on Higher Education (CHED), and Technical Education and Skills Development Authority (TESDA), as well as allocations in low cost housing projects and medical assistance, if so qualified (Sections 10 and 11, id)." - Atty Persida Acosta

(1) Flexible work schedule. This refers to the right of a solo-parent employee to vary his/her arrival and departure time without affecting the core work hours as defined by the employer.

The employer shall provide for a flexible working schedule for solo-parents, as long as it shall not affect individual and company productivity.

(2) No work discrimination. Employers are prohibited from discriminating against any solo-parent employee with respect to terms and conditions of employment on account of his/her status.

under existing laws, parental leave of not more than seven working days every year shall be granted to any solo-parent employee who has rendered services for at least one year with full pay, consisting of basic salary and mandatory allowances.

WHAT ARE THE CRITERIA FOR SUPPORT?

Any solo parent whose income in the place of domicile falls below the poverty threshold as set by the National Economic and Development Authority (NEDA) and subject to the assessment of the DSWD worker in the area shall be eligible for assistance. A Solo Parent can directly inquire from the following agencies to avail of their services:

4. Parental Leave (Employer, DOLE, CSC) Solo parent whose income is above the poverty threshold shall enjoy only such limited benefits as flexible work schedule, parental leave and others to be determined by the DSWD.
advertisement
WHAT ARE THE STEPS TO AVAIL OF THE PACKAGE OF SERVICES?


WHAT ARE THE REQUIREMENTS IN SECURING A SOLO PARENT ID?


1. Barangay certificate residency in the area;


2. Documents/Evidence that the applicant is a solo parent (e.g. death certificate of spouse, declaration of nullity of marriage, medical certificate – if incapacitated); and


3. Income Tax Return (ITR) or certification from the barangay/municipal treasurer.


WHAT DOCUMENT/PROOF WILL A SOLO PARENT PRESENT IF HE/SHE HAS CHILD OR IS DE FACTO SEPARATED FROM HUSBAND/WIFE?


A Certificate issued by the Barangay Captain indicating the circumstances on one’s being a solo parent.


IF A SOLO PARENT FILES THE APPLICATION, CAN AN ID BE SECURED RIGHT AWAY?


No. The Social Worker has to complete the assessment/evaluation of the solo parent situation. The ID will be issued after 30 days from filing. The validity of the ID is one year and is renewable.


WHAT IS PARENTAL LEAVE?


No. Parental leave is non-cumulative and can be availed only during the current year. Further, it can only be availed after the issuance of the Solo Parent ID.


IS THE 7-DAY PARENTAL LEAVE IN ADDITION TO THE EXISTING 3-DAY SPECIAL LEAVE PRIVILEGE?


The law clearly indicates that the granting of the 7-day parental leave is on top of the 3-day special leave and other mandatory leave benefits.


CAN A SOLO PARENT APPLY FOR PARENTAL LEAVE FOR ANY CHILD?


WHAT ARE THE CONDITIONS FOR GRANTING PARENTAL LEAVE TO SOLO PARENTS?


The parental leave of seven (7) days shall be granted to any Solo Parent employee subject to the following conditions:


1. The solo parent must have rendered government service for a least one (1) year, whether continuous or broken, reckoned at the time of the effectivity of the law on September 22, 2002, regardless of the employment status.


2. The parental leave shall be availed of every year and shall not be convertible to cash. If not availed within the calendar year, said privilege shall be forfeited within the same year.


4. The solo parent employee may avail of parental leave under any of the following circumstances:


a. Attend to personal milestones of a child such as birthday, communion, graduation and other similar events;


b. Perform parental obligations such as enrollment and attendance in school programs, PTA meetings and the like;


c. Attend to medical social, spiritual and recreational needs of the child;


d. Other similar circumstances necessary in the performance of parental duties and responsibilities, where physical presence of the parent is required.


5. The head of agency/office concerned may determine whether granting of parental leave is proper or may conduct the necessary investigation to ascertain if grounds for termination and withdrawal of the privilege exist.


CAN A SOLO PARENT AVAIL OF THE MATERNITY LEAVE?

There is no provision in the law that there is a maternity leave for Solo Parents, however, other laws can be applied.

REPUBLIC ACT NO. 8972AN ACT PROVIDING FOR BENEFITS AND PRIVILEGES TO SOLO PARENTS AND THEIR CHILDREN, APPROPRIATING FUNDS THEREFOR AND FOR OTHER PURPOSES