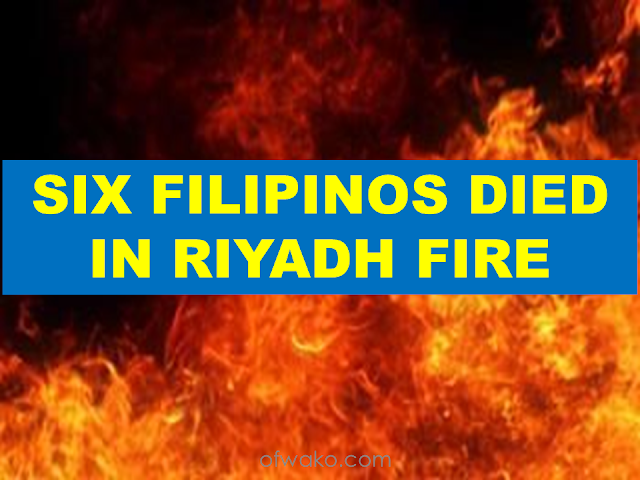 An apartment fire in Riyadh ,Saudi Arabia claimed the lives of six Filipinos including three children and a pregnant woman last Saturday.
The name of the victims are Sahara Mapandi 46 years old,Rema Mapandi 8 years old, Ryan Mapandi 7 years old, couple Dodio Guiamat and Karen Anne Guiamat, and their 1-year-and-3-month-old baby Aneeka Guiamat.
Karen-Anne,a nurse in Riyadh Military Hospital,is said to be pregnant.
According to the news,the fire broke out in the morning of Saturday (20 August) in an apartment occupied by the victims at the Sulaimania district leaving everyone in the apartment dead due to suffocation except for only one tenant who survived the blaze.Taugan Mapandi,the head of the family,left for work at around 6 AM.Thats the time he last saw his wife Sahara,and the rest of the family alive.An hour later,he received a call from the building harris about the horrible news.By the time he arrived home,the victims were already brought to the nearby hospital by the rescuers.

The Filipino Community member in Riyadh who had gathered information of the incident said that that the fire started at the living room located at the ground floor of the building.The lone survivor  managed to escape the site filled with smoke by covering her head with wet towel and crawling on the floor while trying to find the way out.
The cause of fire is more likely due to faulty electrical wiring ,according to the source.
advertisement