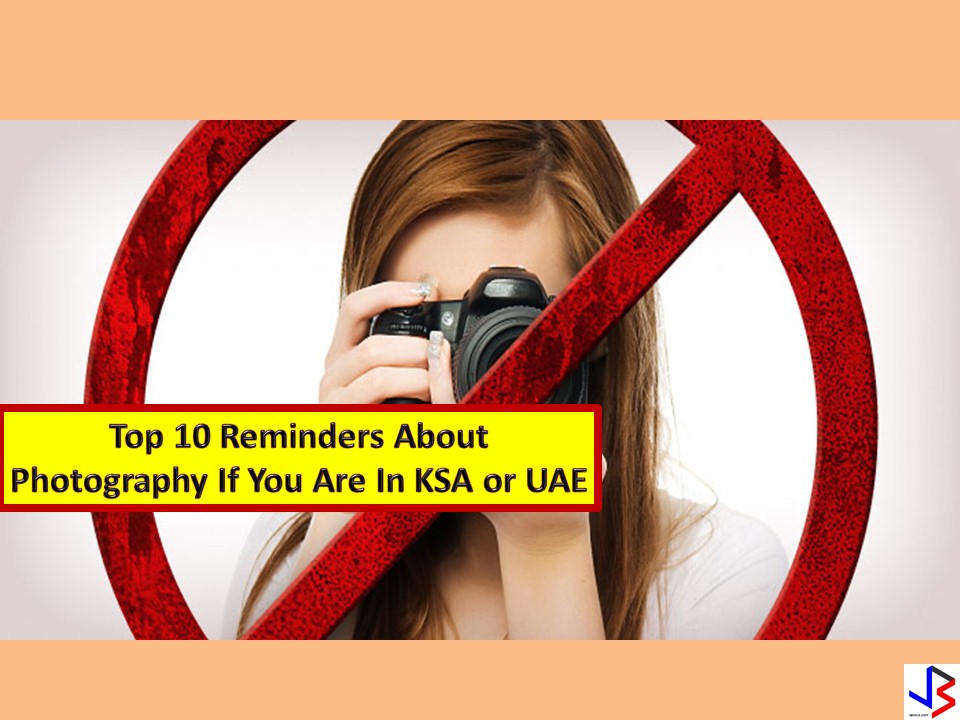 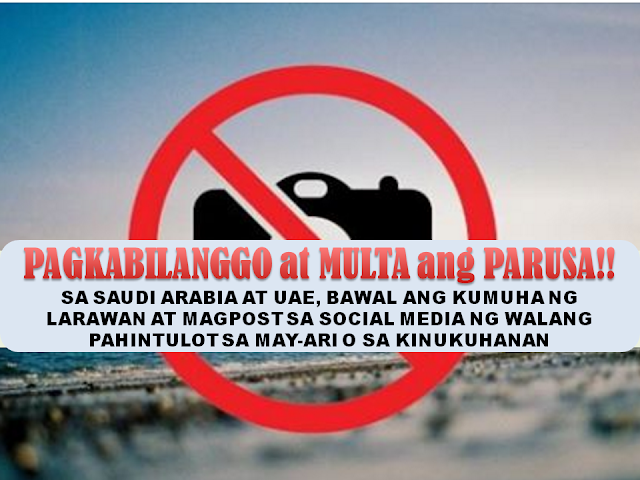 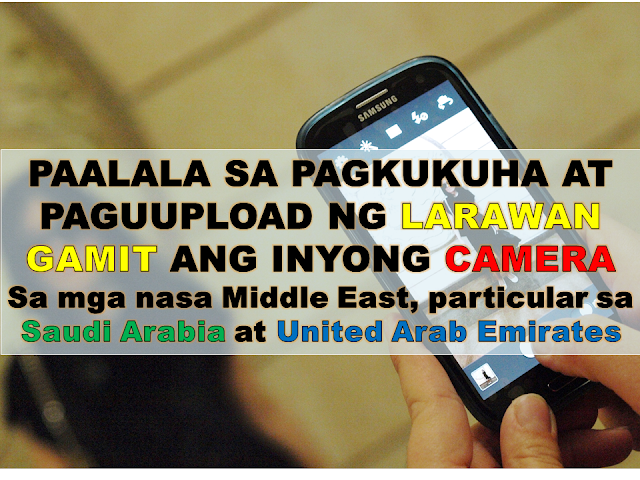 Updating our profile, posting status and uploading latest pictures in Facebook has become our hobbies nowadays. We love to tell and show the world, where we are, who's with us and what we're doing.

In the Philippines, we are free to upload post and do whatever we like in our Facebook page and other Social Media account, even sometimes without restriction.
But, do you know that there are countries like Saudi Arabia and United Arab Emirates that implement strict rules regarding taking, uploading and posting pictures in Social Media?

Recently, an alleged Filipina babysitter in United Arab Emirates (UEA) is currently asking for help after being charged by his employer for uploading pictures of the baby she is taking care of without permission.

Accordingly, the employer is asking hefty amount (100K) for damages because the act is considered breach of privacy.
So, here are some reminders about THINGS YOU SHOULD NEVER DO in Saudi Arabia and UAE to avoid jail terms, fines, lashes, and worst, deportation.
"advertisements"


1. No Taking Pictures of Government Buildings
-Anything that's government related including ministries, airports, military facilities, courts, palaces or looks like it could be a government building, don't take a photo of it.
-The law explicitly states that certain buildings may not be photographed, citing security concerns. In most cases, this includes government buildings and anywhere a “No photographs” sign is posted.
2. No Photography of Person/Women/Children Without Consent or Permission
In Saudi Arabia, taking photographs of local people especially of Saudi Arabian men without permission is not allowed. It is also prohibited to point or take pictures of Saudi Women.

In UAE, taking photos of people, particularly women you haven’t met before and who haven’t give you permission is illegal and can lead to arrest or fines. It is also prohibited to take pictures of women in the beach.

"ADVERTISEMENTS"
3. No photography of Individuals involved in Accident and Posting in Social Media Without Consent or Permission

It is prohibited to take pictures of the injured at the scene involve in accidents. Also it is a violation of Cybercrime law if you post photos online without permission.

4. No Pictures to be taken inside the Mosques
Taking pictures inside the mosque is strictly not allowed especially in the Holy Cities. Photographing outside the mosques and around religious sites should be done with permission.
5. Do not take pictures or film on police, security forces, checkpoints and the like
-You will be mistakenly doing something for surveillance.
6.  No Taking pictures of cat or cat selfies
-Order issued by Saudi Arabia cleric Sheikh Saleh Bin Fawzan Al-Fazwan, after being told of 'new trend of taking pictures with cats'
-He has banned taking photographs of cats in a bid to stop people trying 'to be like Westerners'.
-The Shiek said, 'taking pictures is prohibited if not for a necessity. Not with cats, not with dogs, not with wolves, not with anything.'


7. No taking pictures inside schools
-The Ministry of Education has banned teachers, administrators, parents and students from taking videos or pictures inside schools.
-The ban applies to all public and private schools and kindergartens.
8. No filming or taking pictures of public execution like beheading and flogging
-Violators will face charges in a military court as well as in a Shariah court for the act.
9. In UAE, No taking photographs of aircraft in the UAE without permission

-You may face possible espionage charges.
-In April 2015, three British faced two months prison sentence for taking photographs of aircraft in the UAE without permission.
10. Do not take pictures of embassies and consulates
-Taking photographs of foreign diplomatic missions is a criminal offence punishable under the UAE law
-In 2012, three men faced charges for taking illegal photos of the Qatari Embassy. Also in 2012, a Korean who took photos of US Embassy in Abu Dhabi was arrested and taken to the state security court.