"DUTERTE IS MUCH STRONGER THAN I AM"-ARROYO 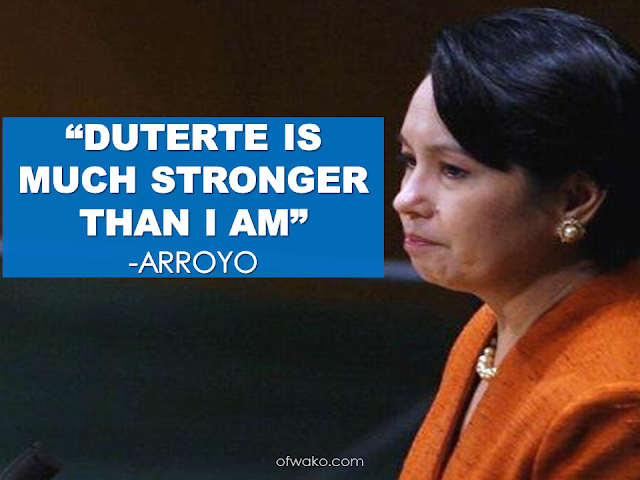 "DUTERTE IS MUCH STRONGER THAN I AM"-ARROYO
advertisement

Former President and now Pampanga Representative  Gloria Macapagal-Arroyo is on full support behind President Duterte's declaration of of "State of Lawlessness" after a blast that killed and wounded  a  large number of civilians in Davao City.The former chief executive said that Pres. Duterte was in the best position to declare it to eliminate any threat to the countr's peace and order and that there will be no risks that the military and the police will abuse their authorities as she did not experienced  the law enforcers  being abusive during her time and there is no reason for them to act otherwise in the present administration.

''President Duterte is a much stronger leader than I am so if I could handle them, he can handle them even better," Arroyo said.
advertisement

In 2003,Arroyo has made a same proclamation when   Davao City's international airport and Sasa wharf has suffered successive attacks leaving over a couple of dozen people killed.
Presidential Spokesperson Ernesto Abella said earlier that the declaration was provided under Article 7,Section 18 of the 1987 Constitution which reads:"The President shall be the Commander-in-Chief of all armed forces of the Philippines and whenever it becomes necessary, he may call out such armed forces to prevent or suppress lawless violence, invasion or rebellion."

However,the declaration will not in any way lead to martial law or even to the suspension of civil rights.It is just simply authorizing the military to exercise police duties to supress any lawless violence.