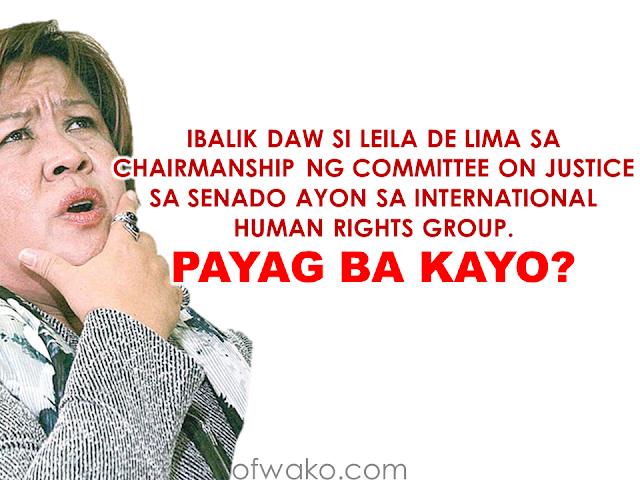 Human Rights Watch (HRW),a New York-based group said the Senate should seek  De Lima's reinstatement as chair of the Senate committee on Justice and Human Rights
“The Senate vote to remove the chair of the Committee on Justice and Human Rights is a craven attempt to derail accountability for the appalling death toll from President Duterte's abusive ‘war on drugs,’” said Phelim Kine, deputy Asia director at Human Rights Watch.
She also said that  the Senate is imperiling the public by doing a cover-up from allegations of their so called "state-sanctioned murder" than exposing them.
advertisement

The international community's attention was caught when the then chair De Lima launched a probe into the drug related  deaths in the country they dubbed as "extra judicial killings".
Since then ,the international communities has been overreacting and munch whatever is being fed by  the media without being able to verify the facts.Before De Lima was ousted,she was able  to present witness Edgar Matobato,a self confessed member of the alleged Davao Death Squad, which referred to by the Commission on Human rights as "non-existent" .
And with his conflicting testimonies,claimed that he carried out killings by the orders of the then Davao Mayor Rodrigo Duterte,but him alone can attest that what he said was true without anybody to affirm and consolidate the reliability of his statements.

CONGRESS PROBE ON PROLIFERATION OF DRUGS INSIDE THE NEW BILIBID PRISON