WATCH THE VIDEO:OFW ARRESTED AT A CHECKPOINT;FOUND DEAD IN CAVITE THE NEXT DAY

Share
OFW ARRESTED AT A CHECKPOINT;FOUND DEAD IN CAVITE THE NEXT DAY 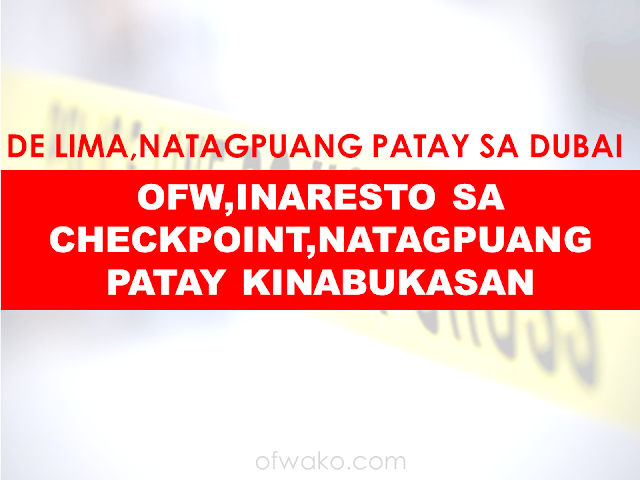 An OFW from Saudi has been found dead in Barangay Lambingan ,Tanza,Cavite a night after he was arrested at a checkpoint bearing a cardboard saying:"pusher ako".
Mark Culata,27,an OFW working in Saudi Arabia was hardly recognizable when he was found.With a gunshot wound that ruptured his head,his body was found to have signs that he was tortured before he was killed.According to the PNP spot report,Culata sustained several gunshot wounds on the different parts of the body,his mouth was covered with masking tape and bore a cardboard with a phrase ,"pusher ako".The police respondents also recovered empty shells,a black body bag with heat sealed transparent plastic bags containing drug paraphernalias.
His victims family denied his involvement on drugs saying Culata is an OFW who was only on vacation from his work in Saudi and was scheduled to be back to work soon.
However,the family is holding  a copy of the CCTV footage that shows Culata's whereabouts before he was killed pointing to the 3 policemen who arrested him and brought him to a Tanza Police mobile patrol car with body number 110,as shown on the CCTV.The family sought the help of Volunteers Against crime and Corruption(VACC) who promised that they will help the family all the way in order for the justice to be served.The Cavite Police Provincial Office formed a committee to investigate about the killing.The four uniformed policemen who was seen on the CCTV footage were also relieved of their posts.The Cavite PPO ensures that they will not tolerate any misconduct among their ranks and that they will deliver impartial results.

Meanwhile, an Overseas Filipino Worker was recently found beheaded and her body further buried in the desert in Abu Dhabi, JP Soriano reported on "24 Oras" on Friday.
The victim was identified as Maria Normita De Lima while the suspect was identified as her nephew Glen Ambro.
Police are looking at financial issues as the motive for the killing.
De Lima reportedly tried to collect Ambro's payment for a 10,000 dirham or P10,000 before the incident.
Police reported that Ambro stabbed the victim inside his vehicle outside her residence before cutting off her hands and head.
He threw the body of his aunt at Al Warqa'a before burning and burying the head and hands of De Lima at Ajman.
De Lima's husband, Police Inspector Salvio de Lima, believes the motive was plausible but called for a deeper investigation.
"Yung sabi yung motibo is just a 10,000 dirham na sinisingil ng wife ko? Posible. Dun sa imbestigasyon, impressed na ako," Salvio said.
Na-recover yung ulo, na-recover yung ibang parte ng katawan," he added.
"I don't care in what way nila ginather yun, basta na-recover 'yun with the information coming from Glen," he added.
Ambro's brother-in-law Raf Maclang and his other aunt Mary Jane defended him and claimed it was impossible for him to commit the crime.
"Hindi kami naniniwala kasi sa 'min na yun lumaki. Hindi pwedeng gumawa ng ganun kasi mababait ang mga anak ng kapatid ko," Mary Jane said.
"Hihintayin pa ba natin sir na maging biktima pa ang isang Pilipino sa kasalanang hindi naman ginawa ng isang Pilipino?" Maclang defended.
Meanwhile, Consul General Paul Raymund Cortes assured that the Consulate will help repatriate De Lima's body.
"We like to inform them that the government, through the consulate, and through the Department of Foreign Affairs, we'll extend all possible assistance to the family," Cortes said.
Salvio, who confirmed his wife's status with the DFA on Thursday, described his wife as a loving mother to their children.
"Yung huling message niya sa 'kin, yung tungkol sa mga bata," he shared. "Kung sino man ang gumawa nito, justice must be served."
(SOURCE:GMA News)