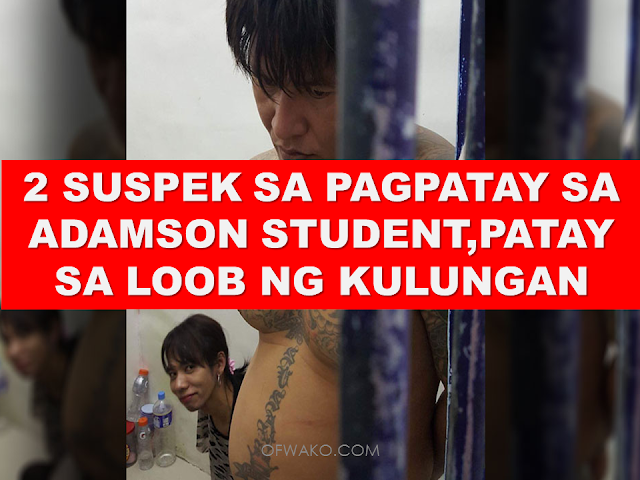 
Reynold Clave alyas "Sakura", the second suspect in the fatal stabbing of an architecture student from Adamson University earlier this month was found dead in his prison cell Sunday, according to the police.

Clave was declared dead on arrival at a hospital at 10:45 p.m by Dr. Patuyog.
Initial findings show the suspect died of “medical complexities” including heart attack.

A day after after he and another suspect repeatedly stabbed student Nick Russel Oniot who was on his way home to Barangay Central Signal Village in Taguig,Clave was arrested.

On a viral CCTV footage of the crime showed the two suspects ganging up on Oniot, with one suspect stabbing him multiple times.

The other suspect,Marvin Bernardo was earlier killed after allegedly trying to grab a gun from the police.

Bernardo was an  ex-convict while Clave was an alleged drug dealer in Barangay Central Signal who was also involved in a number of robbery hold-up incidents in Pasay and Pasig, according to the police.

HERE IS THE CCTV FOOTAGE OF THE INCIDENT.
WARNING:GRAPHIC CONTENT

The victim’s family earlier decried the lack of concern displayed by bystanders and motorists who witnessed the crime. They cannot accept the fact that the bystanders who witnessed the stabbing did nothing to help the victim.
Oniot sustained 18 stab wounds that claimed his life.He has been laid to rest on Saturday.
advertisement