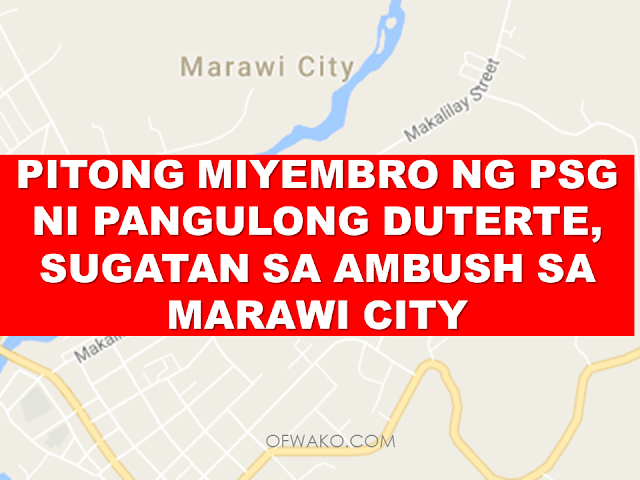 Five members of the presidential security group of President Duterte has been wounded in an ambush in Marawi City.
The five security personnel are part of the approximately 50 PSGs as an advanced party for the planned visit of President Rodrigo Duterte in Lanao del Sur to check on the operation against the Maute group.
According to the report, they were on the way to the 103rd Infantry Brigade Headquarters in Marawi City then there was  a sudden explosion from an improvised explosive device (IED) and then gunshots came from unknown origin targeting them from the elevated parts of the road.
The ranks or position of the 5 wounded PSGs are yet unknown, 2 of which are in critical condition. Somebody got hit in the neck and the other on the head.
advertisement

The PSG personnel has been airlifted  to the 4th Infantry Division Headquarters in Cagayan de Oro for medical attention. Others had been brought to the nearest hospital.
The  ambush suspects are believed to be supporters of the Maute Group with an objective to divert the attention of the government forces bombarding the said group in Butig.

*UPDATE: The number of the wounded PSGs among the convoy of 50 PSGs has been raised to 7 personnel and 2 government soldiers.
advertisement