VIRAL VIDEO: A STRANGE PHENOMENA HAPPENED IN ISRAEL,CLOUDS FORM A CIRCLE AND TRUMPET-LIKE SOUNDS WERE HEARD 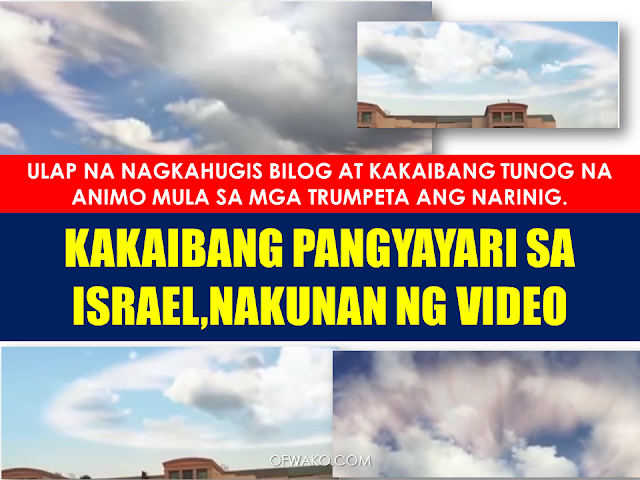 
A viral video is making rounds in social media about a strange phenomena that allegedly happened in Israel.A certain facebook user by the name of Hanna J. Bhattacharya posted a video that shows a circle cloud formation in the sky with a strange sound similar to the sound of trumpets being played.The video has around  2.5 million views now.
advertisement

Bhattacharya's facebook post that reached to  73,000 shares reads:
Unexplained phenomena happened in Israel today. A circle formed in the sky and there was noise like trumpets sounds. Very real. The holy tomb of Jesus Christ is being opened for the first time. This happened in Jerusalem when they unveiled the marble of Lord Jesus tomb. The sounds of horns were heard and the clouds formed a circle. Glory to God.

Although it is difficult to conclude that it happened the same day she mentioned in her post,it is a fact that  the tomb inside the Edicule at the Church of the Holy Sepulchre was indeed been uncovered  for the first time.
Read the details here.