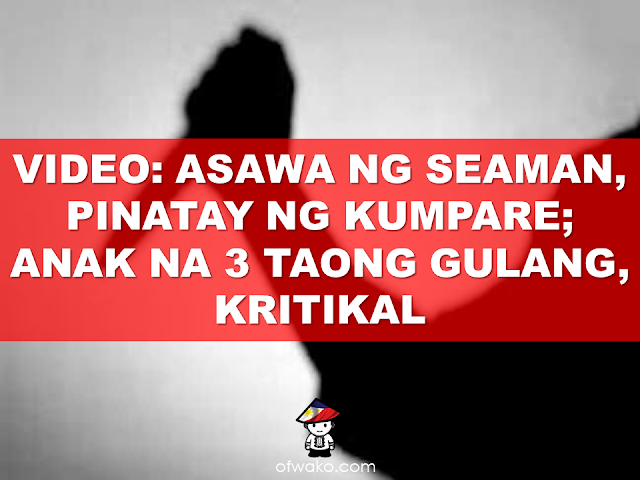 A 25 year-old seaman's wife has been murdered  inside their own house in Camarin , Caloocan  City by a family friend. their 3 year-old daughter is also in critical condition after the murder suspect lacerated the child's throat after doing the same to her mother.

Janelle Mangaluban, 25, saw the suspect outside their house at around 12 midnight on Wednesday  and since he is a family friend, she felt comfortable with him. She told Jayson del Valle, the suspect, to accompany her because she can't sleep that night, after having a drink, the victim went to her room to sleep.
Del Valle saw the victim lying with the blanket partly open exposing a part of the victim's underwear. Del Valle approached her trying to kiss her but the victim sensing the ill motive of the suspect, she struggled and fought the suspect. Del  Valle took a knife and lacerated Janelle's throat that instantly killed her.
advertisement

Being annoyed by the crying of the victim's 3 year-old daughter, he grabbed the child and lacerated her throat as well.
The body was found by the victim's relatives the next day and brought the child to the hospital.
The suspect was also caught hiding in the ceiling by the police operatives, waiting a perfect time to get away and escape..
advertisement

The suspect says he is sorry for what he did but it is too late. He has been detained and charged with murder and attempted murder.
©2017 www.ofwako.com
Share