Warning to OFWs: Fake Documents Could Land You in Jail 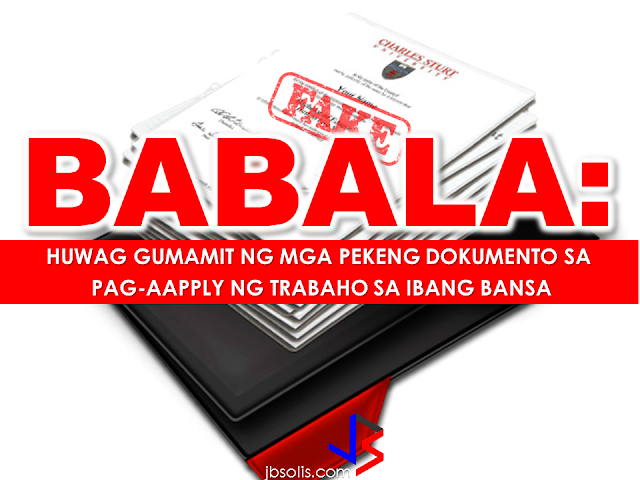 To those OFWs who submitted fake or altered documents while applying for jobs abroad, it will only be a matter of time that the authorities find out about it and to those who are applying or planning to apply for a job using forged documents, you better think again because you will only put yourselves in trouble by doing it.

In UAE, people who fake certificates to get a visa or a job will get ten years jail term,  while those who photocopy official documents and tamper with them face up to five years in jail.

“This has become a phenomenon committed mainly by those of Asian nationality as they try to find jobs or visas in the country that correspond to the falsified degree they claim to have. The forgery is usually discovered as these individuals give in their degrees to foreign affairs offices for attestation,” according to a source in public prosecution.

Suspects face charges of forging an official document, faking a stamp, and attempting to use the fake document.

The warning does not apply only on OFWs but to all expatriates. In Saudi Arabia an expatriate from other Arab country sentenced by Jeddah court to a 1.5 years in prison while fine 5000 Saudi Riyal.He will also face deportation after the prison punishment because of using a fake degree.

This expatriate use his Ph.D degree for job in private dispensary. He was informed by ministry to the local police when the employer asked him for authentication of his document.

Obtaining a fake document is easy but the authorities have ways and resources in finding out if you are submitting an authentic document and most people are not aware of it. It will  be a matter of time but they will sure find out if you submitted forged documents and press charges to the violators.

The Saudi Arabian government started mounting a crackdown on fake diplomas and other documents that land users in lucrative jobs in the kingdom by using fake degrees and credentials.

People who will be caught using fake documents will undergo trial and penalized if proven guilty, they will face jail term and be deported after serving their jail term. They will also never be allowed to enter the kingdom again according to Al-Maroal.

An investigation by the Ministry of Education has revealed a huge number of candidates— Saudis and foreigners alike — who have obtained fake degrees and diplomas from illegal agents, Arab News report said.


Fake documents are everywhere for a cost. Avoid using them and don't even think about it. Instead of landing on your dream job, you may land in jail  and that could be a nightmare.

The Department of Foreign Affairs fervently warn OFWs against submitting fake documents while applying overseas jobs to avoid getting themselves into trouble.

Barney Almazar, lawyer at Gulf law, said that an OFW had recently been arrested by operatives of Civilian Irregular Defense Group (CIDG) and imprisoned after it turned out the document she submitted a fake document, which she had processed by someone in the Philippines.
“In her new work, she was required to have Transcript of Records or TOR,” narrated Almazar. “She had it processed back in Manila. When the documents arrived in the UAE, she had them stamped in Abu Dhabi (because she lives there). Then, when she came back to collect her documents, it was discovered that the documents were fake. She was arrested by the Civilian Irregular Defense Group (CIDG) right away,” he said.

Here is a real life story of an OFW who worked as a nurse in Dubai submitted in an OFW forum seeking for advise: 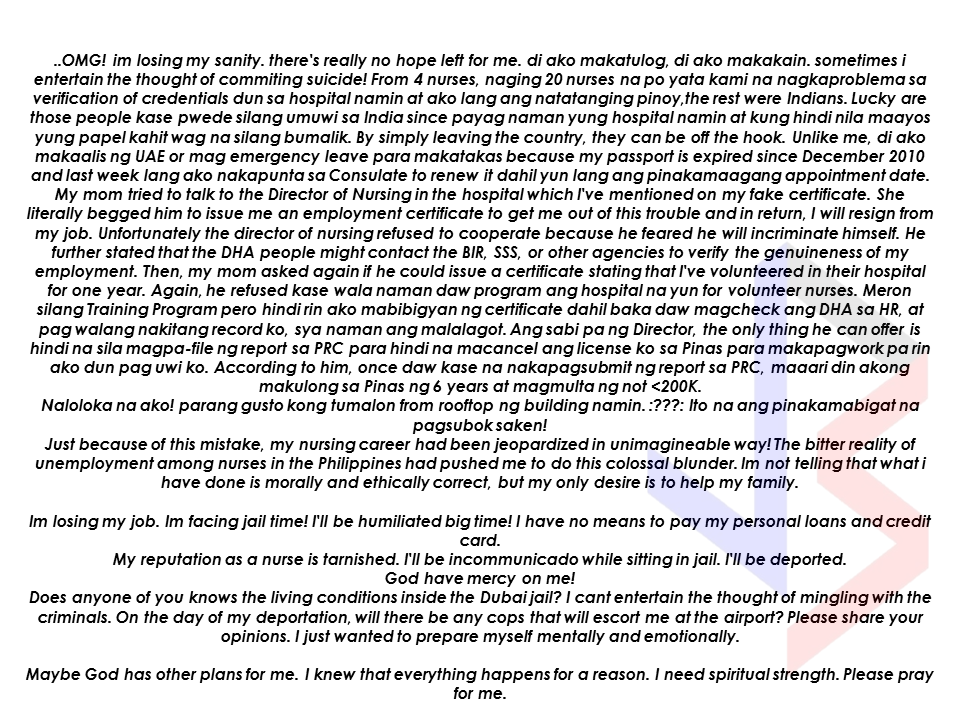 This article is filed under: OFW News, Fake Documents
RECOMMENDED:

10 TIPS ON HOW TO SPOT A FAKE NEWS

OFW GETS HARSH WORDS FROM OWN BROTHER

BEFORE YOU GET MARRIED,BE AWARE OF THIS

ISRAEL TO HIRE HUNDREDS OF FILIPINOS FOR HOTEL JOBS

MALLS WITH OSSCO AND OTHER GOVERNMENT SERVICES

HSW IN KUWAIT: NO SALARY FOR 9 YEARS

BELLO ASSURES DECISION ON MORATORIUM MAY COME OUT ANYTIME SOON

BE CAREFUL HOW YOU TREAT YOUR HSWS

PRESIDENT DUTERTE WILL VISIT UAE AND KSA, HERE'S WHY

KENYA , THE LEAST TOXIC COUNTRY IN THE WORLD; SAUDI ARABIA, MOST TOXIC