OFW Killed As A SAF Member Went Amok At A Wedding

Share
Seven empty cartridges of cal.45 have been recovered by Scene of the Crime Operatives (SOCO) of the Philippine National Police (PNP) on the crime scene— a wedding reception. Two people were killed including an overseas Filipino worker (OFW).
Advertisement 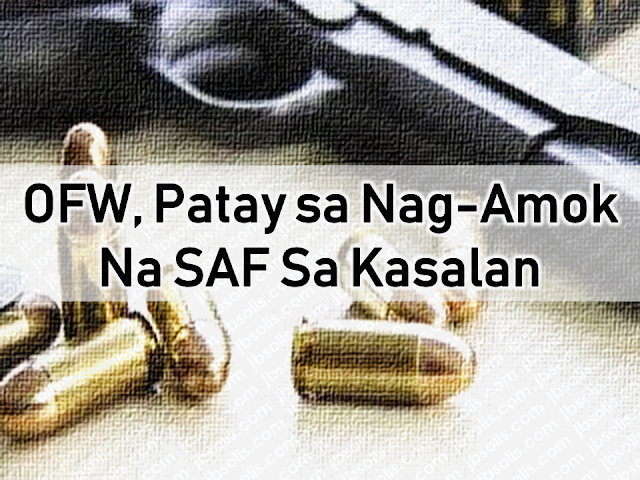 Sponsored Links
Florante Tabuso, 36-year-old OFW, was dead on the spot while three of his relatives, Palmie Susa, 36; Liezel Agcamaran, 33 and 10-year-old Joshua Rubang was severely wounded when PO2 Jun Christopher Briones, a Special Action Force (SAF) member of the PNP went amok after the victim failed to shake his hands at a wedding reception in Brgy. Naglaoa-an, Sto Domingo, Ilocos Sur at around 12:35 at the peak of the wedding celebration.
According to Sr. Insp. Robert Valiente,  Sto. Domingo Police Chief, an argument heated when Tabuso refused to shake the hands of Briones, who is his cousin. Feeling despised, the suspect draws his firearm and fired shots on the OFW and his relatives seated on another table.
The suspect fled at the height of commotion while the victims were brought to the hospital for immediate treatment.