ALUGBATI is a vine commonly grow in most of the areas in the Philippines. Characterized by its vivid purple color heart-shaped leaves and sticky resin, alugbati is used in some dishes in some provinces. Aside from being a local vegetable, it is also among the list of medicinal plants and herbs that can cure many health issues and helps in our nutrition.
Advertisement 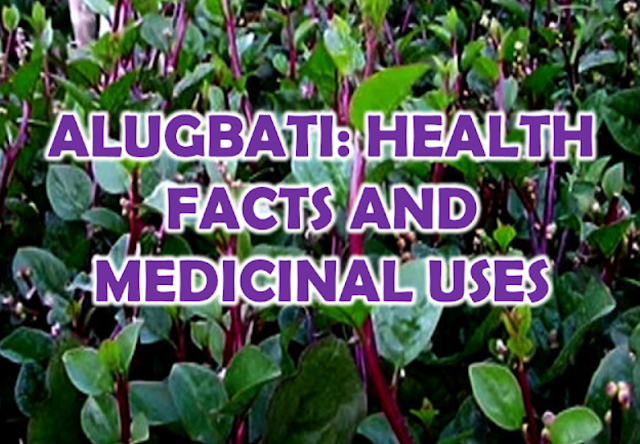 Alugbati plant contains saponin, vitamin A and B. It also has glycosides, saponins, tannins, flavonoids, terpenoids, and carbohydrates.

The different parts of the alugbati plant have different methods on how to extract the juice or resin to be used as a medicine.

Roots:
The juice coming from the roots of alugbati obtained from pounding or grinding , or boiling you can also boil it.

Leaves:
To get the juice from the leaves,it is often boiled or pressed to obtain the thick resin.

Vines:
The thick resin or juice coming from the vine can be obtained by pounding and pressing it.

HERE ARE THE DISEASES THAT CAN BE CURED USING ALUGBATI:

1. Ringworm: Applying the thick resin or juice from the leaves or vines can heal the ringworm on the skin.

3. Hypertension: a person suffering from hypertension can be cured by drinking the tea from boiling alugbati leaves.

4. Wounds and cuts: the juice extracted from alugbati leaves mixed with oil or minced leaves applied directly on affected part of the skin can help it to heal fast.

5. Acne and pimples: applying alugbati resin on pimples and acne can help ease the swelling.

6. Ulcer: a tea made from boiling alugbati leaves can easily cure stomach ulcer.

7. Stomach ache: boil some alugbati vines and roots and drink the tea to cure stomach ache.

8. Headache: the thick and sticky resin is applied on the head to alleviate headache.

READ MORE:
Find Out Which Country Has The Fastest Internet Speed Using This Interactive Map
Find Out Which Is The Best Broadband Connection In The Philippines