Every Overseas Filipino Worker (OFW) has a dream in mind the very instance they set their feet on their host country— it is to give their family back home the best possible future they can give to their family. It may be to have a house they can call their own, a business or to give their kids the best education to ensure them of better future. They are determined to do it even it means a lot of sacrifices. They battle homesickness and everything just to get there.
Lust like an overseas Filipino engineer in Dubai who puts his family's future in his utmost priority. That’s why when he decided to work overseas, he had one thing in mind – saving up. However, an unfortunate thing happened that burn his dreams down to ashes.
Advertisement 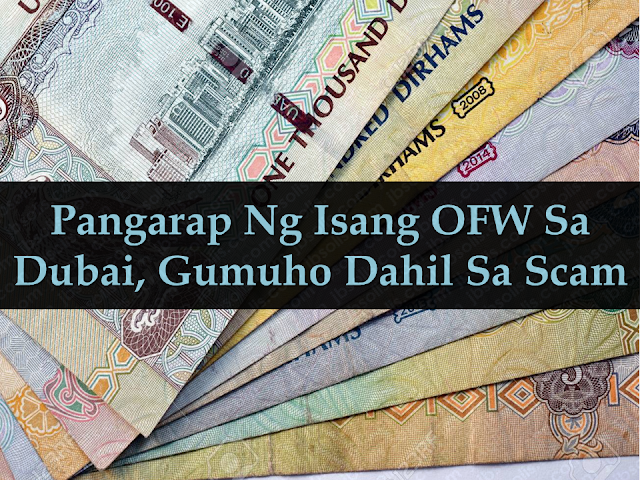 
In just three years, Joey got his home renovated. Next in his mind is to put up a small restaurant in his hometown in Cebu.

Everything has changed when he met a woman named Ivy in Dubai who promised him a big return of profit by investing in a money lending business in the Philippines.

The promise of bigger income lured him into investing almost everything he saved, but it turned out to be a scam.
The scammer told him that his Php250,000 investment had earned manyfold after only a few months and recruiting others may give him more earnings.

After receiving P10,000 for the first six people he was able to recruit, his trust with Ivy has been established already. He took the risk of investing additional Php50,000.

When he returned to Dubai, one of his recruits called him and said that Ivy could no longer be contacted.

Starting to be suspicious and panicked, Joey quickly dialed Ivy’s number but to no avail.  Joey then realized that his dreams corroded.

Joey is still paying for half of the money they invested just to avoid being sued in Dubai. He has also lost his car his car to pay for the person who threatened to bring the matter to authorities.

Just a reminder to fellow OFWs: Never trust anyone who promises you an instant profit or huge return on investment. It is most likely to turn out as a scam.

11 OFWs Illegaly Detained In A Room For 1 Week, Asking For Help