Share
The engineer who allegedly having an affair with a domestic worker in Saudi Arabia, Sherlyn Gerasta is now in the Philippines. 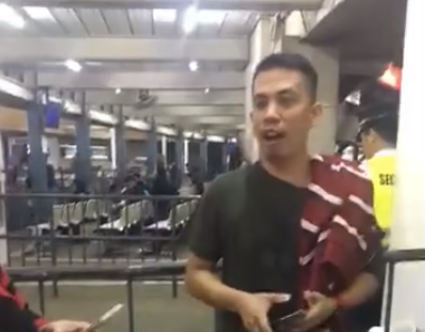 
A story of a love triangle had been viral recently. A husband of an OFW in Saudi Arabia sought the help of Mr. Raffy Tulfo to convince her wife to come back to his five children after allegedly having an illicit affair with an engineer in KSA. The wife, Sherlyn, said she would not want to be with her husband anymore and having to choose between her children and the engineer, she would choose the latter.
Ads

Part 1
Raffy Tulfo raised the matter to OWWA Deputy Administrator Arnell Ignacio who vowed to use everything in his power to send both the OFWs back in the Philippines considering the attitude and behavior of the involved infidels.


Sherlyn Gerasta was sent home first assisted by Deputy Ignacio. While the engineer was left in Saudi Arabia.


Deputy Ignacio said he was saving the female OFW from worse. With all the statements they divulged in public, admitting about their affair, the OFWs will be prosecuted in Saudi Arabia which has a strict law against adultery.


Part 2 The engineer, however, was still left at that time in Saudi Arabia but Deputy Ignacio still vowed to send him home.

Recently, a video uploaded by a certain netizen confirmed that Edwin Madredio, the engineer who is having an affair with Gerasta is now in the Philippines and is expected to meet with her anytime soon.

It was not clear however if the meeting will be facilitated by OWWA or Mr. Raffy Tulfo.

Part 3
Below is the video of Madrideo being fetched at the airport.